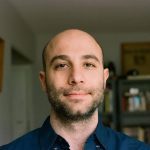 Since 2007, Mike Gennaro has been offering private drum lessons to students of all skill levels, from kids, to adults and seniors. He loves introducing beginners to the basics of rhythm just as much teaching more advanced students their favourite songs and drum parts. Mike’s eclectic background allows him to easily expand on the fundamental role of the drums in all styles of music. By placing an emphasis on having fun and encouraging their own creativity and sense of improvisation, Mike has connected with all of his students through adapting to their individual styles of learning.

Having studied privately with veteran Toronto drum teachers Dave Clark and Rick Gratton, Mike is equally versed in jazz and rock with an affinity for pop, r&b and funk. His students thrive on Mike’s passion for teaching as well as his obvious love of music. Rather than focusing entirely on technique for it’s own sake, Mike handcrafts his exercises with the goal of placing the material in a musical context and stresses the relationship between the drums and other instruments. He patiently allows his students to grasp the material at their own pace, reassuring them that music is a joy to be experienced, not a race to be won.