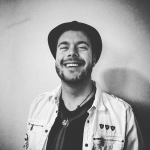 With over a decade of professional playing, teaching and touring Micki B has some great lessons to pass along to all aspiring drummers. Born and raised just outside of Calgary, Alberta his training in music is far from classic. He was that kid, tapping his feet to any beat in class, constantly listening to music and likely being a real nuisance to everyone around him. He finally got a shot at playing the kit in grade 9, when he and his best friend had the opportunity to form a “rock band” for a poetry assignment in language arts. That duo later became Micki’s first real rock band that earned him money and reputation on the Calgary local music scene.

Since those formative years, Micki has gone on to tour Canada and record with some major Canadian acts (Midnight Shine, Noel Johnson, Matt Blais) work with some heavy hitters in the industry (Josh Rob Gwilliam – OCL, Garth Richardson – The Farm Studios) and mentor under some of the finest players in Canada. He was one of five accepted into the Drum Performance & Technology program at MetalWorks Institute in 2010 and has most recently toured with up and coming Canadian Indigenous rock group, Midnight Shine on their summer 2018 festival tour.

Micki prides his playing as a combination of groove and soul and honest, authentic feel. “For me” he says, “It’s nothing too fancy. I just work to serve the song. Stay in time, listen to my band and keep smiling. Having fun is the most important part of playing, everyone feels that when you’re talking drums.”

Whether you’re new to music or a seasoned vet looking for a creative approach to expressing yourself through groove, drop Micki a line. He’s taught 8 year olds and 70 year olds alike. He believes that you’re never too young or too old to start. Also known as the Trusted Authority of Musician Wellness, Micki incorporates injury prevention, holistic wellness and nutrition into his programming, so students get much more than a basis of knowledge in music. Those who work with him increase the playing longevity of their careers.