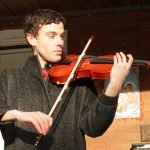 Gabe is a multi-instrumentalist teacher and performer originally from Halifax Nova Scotia.  Teaching violin, guitar, piano and drums, he has a wealth of teaching experience in Halifax, Toronto and Montreal .   A freelancing musician and bandleader, Gabe keeps his finger on the pulse of the Toronto music scene, always searching for new developments.  Having studied violin and drums from an early age, he quickly found himself immersed in Halifax’s local music scene, playing in several bands.  After studying classical percussion Dalhousie University, he moved to Toronto to study music at Humber College, receiving his degree in 2013. Along the way, Gabe has toured and performed with a wide variety of bands and recorded at some of Toronto’s finest studios including Revolution Recording, Glenn Gould Studios and Humber College studios.  The Soles – one of his main projects early on in Toronto – garnered praise in the wake of their release Broken Ghost: “Since forming in 2001, Toronto-based trio The Soles has been earning praise from fans, critics, and fellow musicians” – Adam Morrison, Alan Cross’ Exploremusic.com

“The message is clear, the music is good and the project as a whole offers up food for thought. Broken Ghost is, in my opinion, some of The Soles’ best work!” – Melissa Minners, Review. G-POP.net, New York

In addition to rock music, Gabe has performed in a number of jazz bands including his own, which he continues to compose for and lead. Over the years he has lived, taught and performed in Halifax, New York, Toronto and Montreal, speaking both English and French.  His teaching has lead him to schools such as Degazon Music in Mississauga, West Island music Academy in Montreal, Longe and Mcquade and Starling Music in Toronto.  Starling Music owner Alana Kurtis had this to say about his teaching: “You were a fantastic teacher and I am totally happy with the way things went. Thanks for being so on top of things and for your positive attitude and commitment. The kids and parents loved you.”

Future projects include recording and releasing an album with local jazz band The Sean Stanley Quartet and touring to the East Coast in the summer. Gabe loves to share his passion for music with students, never failing to inspire them to be the best they can be. “In learning you will teach, and in teaching you will learn.”
― Phil Collins