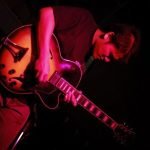 Guitar for beginners, intermediate to advance. Focusing applications for improvisation, scales and modes on different genres such as jazz, blues, funk, rock, pop and etc.

Playing for over 20 years, I developed skills needed for guitar playing. Firstly, I was into playing Beatles’ songs, Folk songs, rock songs such as Led Zeppelin. Then studied guitar in Yamaha School of Music in the Philippines. I learned a scales and theory for guitar. I was playing with various bands back then, doing original and cover songs. There are many bands I played for in different bars around Metro Manila. Different genres such as classic rock, alternatives, pop music, reggae, ska and blues. Some of my bands even recorded songs for some recording companies. However, I fell in love with blues the most. I studied lots of blues materials such as SRV, Clapton, BB King and other contemporary blues artists such as Mayer and Bonamassa. After playing blues for years, I studied Jazz. I finished advance guitar course in Lyric Piano School Music. Then I played for jazz bands in jazz clubs, played solo and duo guitar in weddings and formal events.

During these times, I was offering guitar lessons, home lessons and teaching for some music schools part time.