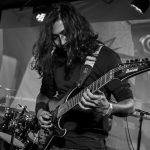 Guitarist, teacher, composer, and arranger – Arjyo Bala has a unique approach to playing and teaching the guitar. His original style of playing and composing comes from his concept of Unification – the blending of Indian classical music melodies with western genres, which he has been developing for many years now. His aim is to bring forth a new style in Western Music.

​He posts his ongoing research data on his information website Raga Rock Harmony.  The data is free for all and anyone with an interest in exotic scales or Raga’s, can surely benefit from this pioneering project.

​He is also very interested in composing for film, tv and video games and has been working on multiple projects with a wide variety of sounds.

His musical influences include guitarists like Joe Satriani, Guthrie Govan, John Petrucci, Marco Sfogli and Paul Gilbert to name a few. He led his own instrumental Ragarock band in his hometown of Calcutta, India for four years before he moved to Toronto. Currently, he plays with the band “Strawman” based in Toronto. Arjyo has already released a debut EP, titled “Arcane Accord”, available here and on all major digital distributors . He is in the process of making a second album.