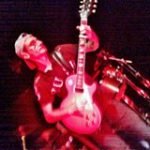 Guitarist/Keyboardist, Performer, Composer and a private Music instructor for the almost 30 years,

What sets Michel apart, is his versatility; his ability to perform and teach both instruments Guitar and Piano in any style of music with various chords and time signatures changes.
e; g: Blues, Jazz, Fusion and Progressive, Classic and new Rock.
Powering through Rock riffs or any other pop song. He is equally at ease gliding over Classical finger-style pieces.
Studied Classical and Jazz Guitar with Mike Shand (a former student of Alexander Lagoya and Ely Kasner) and also with Patrick Roux at the Royal Conservatory of Music in Hull Quebec. He also studied classical Guitar with Steve Roland and Piano with Anne Shaw for1 Year in Music at the Carleton University of Ottawa and graduated with a three years’ program diploma in Music at Humber College in Toronto.

To refine his technical skills on the top of his music studies, he successfully completed the Recorded Music Production Program diploma in 2001 at Trebas Institute of recording arts; Toronto

Michel’s goals are to write and perform music in many styles from top hit songs, to Jingles, film work and also to produce and record other artists in the near the future.

His talent, experience, and determination combined with the ability to expand his repertoire for the interest and enjoyment of his audience make him an asset to the music scene and the Music Education.