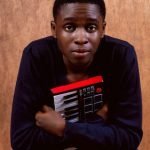 *Ability to work effectively as part of team, as well as work independently.

*Ability to learn from and listen to foreign and abstract ideologies