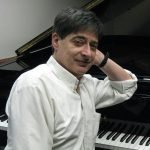 Pianist Vladimir Oppenheim performs as soloist throughout Canada, US & Israel.

Vladimir made his first public appearance at the age of 11 playing Beethoven’s Piano Concerto No 1 when he was a student at Special  Music School in Kharkov, Ukraine.

He has earned a Bachelor in Music in Piano performance from The Rubin Academy of Music in Jerusalem, Israel. Amongst Vladimir’s teachers, there were prominent pianists Boris Lvov & Michael Boguslavsky.

The years of studies at the Academy were devoted also to widening a piano repertoire. Vladimir received numerous acclaims for performances of Beethoven’s Piano Concerto No 2, Tchaikovsky’s No 1, and Rachmaninoff’s No 2 & 3 & Ravel’s Piano Concerto for Left Hand.

As of late, Vladimir has continued his studies with pianist Gregory Haimovsky in New York, who himself was a pupil of a wonderful pianist Yakov Zak from Moscow conservatory.

Vladimir Oppenheim is fluent in English, Russian and Hebrew.