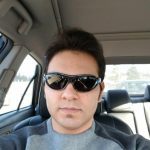 Arshia was born in 1994 and started playing guitar at the age of 9. He was more involved in 80’s music in the beginning but after couple of years getting more into guitars his appetite shifted over more progressive and deeper stuff such as Symphony X, Shawn Lane, Yngwie Malmsteen and similar musicians. People with more sense of music. Fusion, classic, or simply anything rather than just head banging.

He started composing his own music at 2010, nothing publishable, just the start.  The main composing started at around 2013. And the songs presented in the first album are mostly from that time.

During the time he was composing, he co-operated with “Master Of Persia”, the well know band formed in Iran and leader of underground metal music in Iran, he is still their main composer and guitarist, but, since he couldn’t find people who are more close to his taste of music, he started to come up with his own one-member band,”Vandike”.

He started to learn and do most of things by himself such as Bass, keyboards, recording or anything which was needed to help him keep up the work.

He is also a guitar instructor in two main music academies in Canada, besides being and electronics engineer, which was and is very beneficial and relative to the instrument he plays and analysis needed for recording and productions.