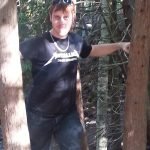 This teacher has successfully passed our Cleftune Background Check.

I grew up in a highly musical family.  My father played drums and so did my brother and it inspired me to start playing guitar at the age of 13.  I am a self taught player playing basic chords and power chords in the first few years.  I was originals influenced by rock and roll, pop rock and classic heavy metal.  I played in lots of battle of the bands contests with 2 different bands as a teenager where I started developing my skills in singing and playing guitar at the same time as a front man and learning how to play some of my favorite songs.  In 2012 I helped organize and participate with my siblings in a fundraiser event called Autism’s Got Talent.  I helped coordinate 13 individual musical performers to the stage, also rehearsed and performed 4 songs with 2 adults on the spectrum.  This got me featured in a Hamilton Greater Musican’s magazine article mentioning my passion, credentials and involvement musically in the community.  This is also how I starting teaching my first client named Alex.  He was an opera singer and gave me vocal lessons and I taught him to hone his rhythm guitar and bass playing skills.  It lasted over a year before moving on to a new student I found online.  My band and I at the time also opened up for a Motley Crue and Kiss tribute band in July 2014, this is my best gig I’ve had so far and now new things are happening a lot.  A new client named Lorri started coming to my place to get basic chord progression lessons from me so she could play some cover songs she wanted to learn.  Since my last client over a year I have been preparing, teaching myself more theory so I can teach someone to read music or find major and minor scales to play if they are at that level.  I have also been composing and producing my own album in my room which is giving me a wider perspective on how to play even better and teach from all kinds of different angles.  Music is my life and I love playing and teaching what I know to anyone kids or adults.